History of the County Engineer

Soon after Ohio became a state on March 1, 1803, the position of County Surveyor was one of the first offices created by the state legislature with an act passed on April 15, 1803. When a new county was created, the legislature would appoint a Court of Common Pleas within the county which then appointed the positions of County Surveyor, Recorder, Prosecuting Attorney, and Clerk.

The position of County Surveyor remained an appointed position until the passage of a law on March 1, 1831 which established the position to be elected to a 3 year term, beginning with the election on the second Tuesday of October, 1834. In 1928 the term of office was lengthened from three years to four.

The early responsibilities of the office revolved around the subdividing of property and specifically the task of clarifying land titles and boundaries. Over time and by the late 19th century, as areas became more populated, the focus of the position had shifted to establishing roads, canals, and bridges to connect communities and to further facilitate settlement and development.

In 1915, legislation dictated that the County Surveyor also serve as the Resident Engineer for the State Highway Department. On August 30, 1935, legislation officially changed the title of County Surveyor to County Engineer, effectively establishing the position that exists today. Currently, only persons who hold registration certification from the State of Ohio as both Registered Professional Engineer and Registered Professional Surveyor may hold the office of County Engineer. 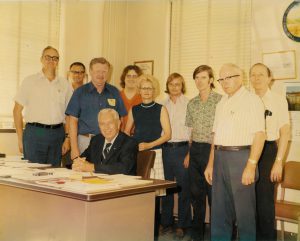